Posted on September 8, 2015 | Comments Off on Tassie is amazing!

Rode from Devonport to Hadspen, near Launceston, 92 kilometres. The first 50 kms were gruelling, riding into a brisk headwind. Making matters worse were the trucks. Got run off the hwy a number of times and was being passed by approx 100 every hour. It was challenging. I was bunny hopping roadkill, trying not to get hit by wayward trucks, riding fast to stay warm in the chilling southerly wind blowing off nearby snow-covered mountains and trying to keep my brain from bouncing outta my head – the highway early on was so rough I couldn’ see out of my rear-view mirror.
My viral infection meant I could only ride around the 100 km mark. A far cry from 300 km on the Nullarbor Plain.
Raised roughly $100 today collecting in two pubs in Launceston…had dinner with a very interesting couple in the second pub…great chatting with some locals over a meal
Saw a sign saying western tires, a famous landmark, but it was in the east of tassie. I wonder if the eastern tiers are in the west somewhere???
Off to St Helens on the north-east coast tomoz….
Cya…zzz 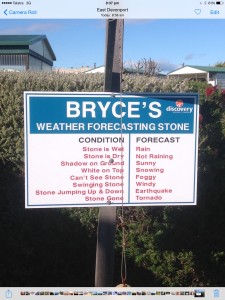 Gotta love the Tassie sense of humour. Out of picture there is a stone hanging on a slender rope. 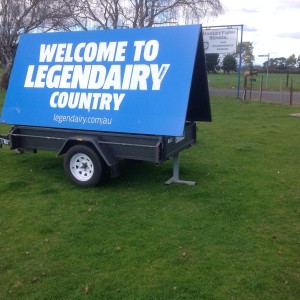 Ditto on the Tassie humour. 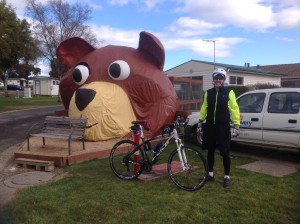 My first sighting of a Tassie Devil. I didn’t know they were that big. This is in the Discovery Caravan Pak in Hadspen. thanks for the free cabin, Dimity. 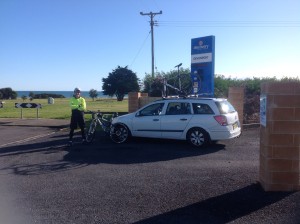 The Discovery Caravan Park at Devonport where we had a free cabin…thanks so much to the management.