Posted on September 13, 2015 | Comments Off on Climbed Mt Wellington today

Mt Wellington is more than 1,000 metres high and the views of Hobart from the top were spectacular. The ride down was almost 20 kilometres and it was awesome. Barbie was tucked in behind me in our car and I had the gopro on my head filming. It really is the most stunning capital- city view anywhere in Australia. I reckon the distance to the horizon must be at least 80 kilometres. There are no trees up top, just plenty of rocks and low shrubs…quite barren really. There was even snow on top.

Over lunch we caught with a great mate who I’ve only seen twice in 30 years – Tom Clarke was the best man at our wedding. It was great to see him again over lunch just near constitution dock in Hobart, which is where the Sydney to Hobart yatch race ends.

I have finished riding through tassie now, but am still 73 kilomtetres shy of 14,000 kilometres all up for the ride. On the way home I plan to ride from Yass into Canberra and will get the kilometres then. When I finally ride through Canberra I will have ridden through every capital city in the country.

The view of Hobart from Mt Wellington. 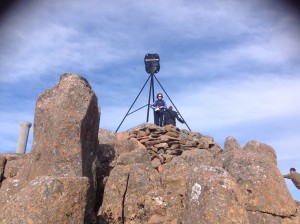 Barbie on the trig at Mt Wellington. 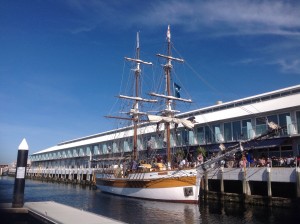 A tall ship sailed into constitution dock while we were there. 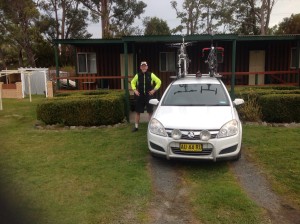 Our cabin at the Snug Caravan Park courtesy of owner Maureen. Thanks so much!